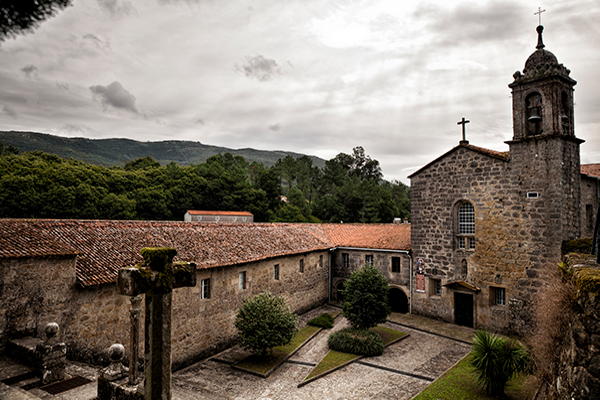 In the fertile lands of the parish of Padrón in Herbón lies the Convent of San Antonio de Herbón, which is an excellent example of a Franciscan Order.

In 1396, in this valley bathed by the crystalline waters of the Sar and the Ulla, the Franciscan Order settled in. Their presence has lasted for more than six centuries and still continues today.

This centre of worship invites every visitor that comes close to feel and breathe the calm, sober, peace and tranquillity that envelops you from the moment that you reach its ancient walls. To access the Convent, we must go up a steep ramp that takes you to the door of the chapel. To our right, we see a fountain that depicts one of the Franciscans in a position of prayer. The fountain bears an inscription indicating it was built in 1786, but as we have said before, the religious order has been in this area since 1396.

And this convent provides some of the most prized resources of all the territory of the Iria region, such as the Herbón peppers that were brought from America by one of the Franciscans who visited that continent.

A heritage attraction included in the Herbón Pepper Route and near we can see the “pesqueiras“.

360º Virtual Tour of the Convent of San Antonio de Herbón.

Easily accesible, on foot and by car

From April to October, when the pilgrim hostel is opened, there are guided tours every day at 06:00 pm. Nowdays is closed.

Visiting times could be interrupted by any liturgical celebration.