Gon on a pilgrimage

In 2010, Padrón Town Council started awarding its own diploma called the “Pedronía,” in order to highlight the arrival of the Apostle’s body in this area. It is also a way of continuing with the medieval tradition according to which pilgrims, after visiting the Apostle’s tomb in Santiago de Compostela, travelled on to Padrón to visit the sacred site where his body was brought ashore.

How to obtain the “Pedronía”

You must complete one of the following pilgrimage routes: 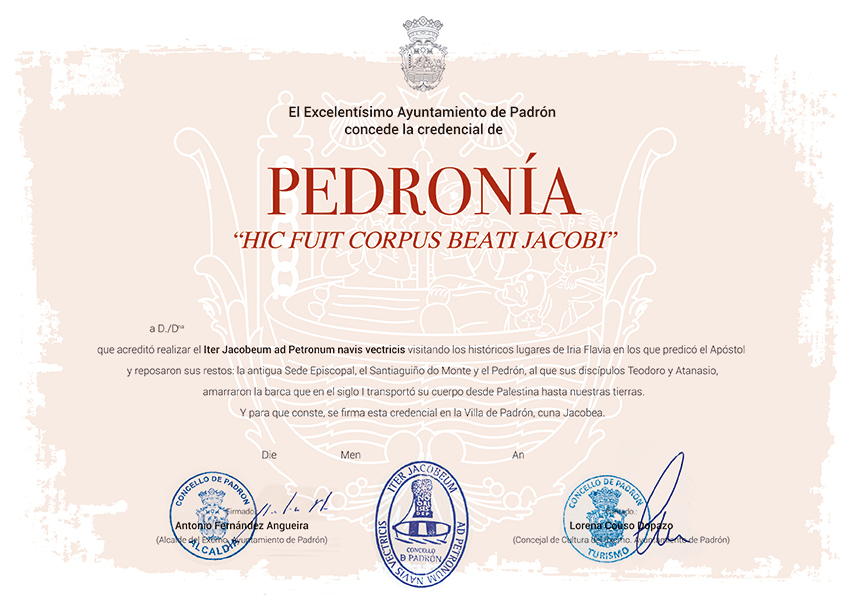 1. Obtain a certifying document. You can download and print “ THE PEDRONÍA “.  You can also request this document from the tourist office in Padrón. (IMPORTANT: The Pilgrim’s Credential is enough if you are a pilgrim )

2. Fill in your particulars and stamp the document in the municipality where you are starting your journey.

3. When you arrive in Padrón, stamp your document in the Church of Santiago de Padrón or in that of Santa María a Maior de Iria Flavia.

4. It is advisable to visit all the sites linked to St. James: the “Pedrón” stone and the Church of Santiago de Padrón; the “Fonte do Carme” (fountain), featuring a depiction of the “Traslatio” (the Apostle’s body being brought to Galicia) and Queen Lupa’s baptism; and Santiaguiño do Monte, identified as the place where the Apostle preached and hid from his persecutors, and the Church of Santa María de Iria Flavia, the former episcopal see.

5. Request the “Pedronía” diploma in the tourist office or municipal pilgrim hostel.