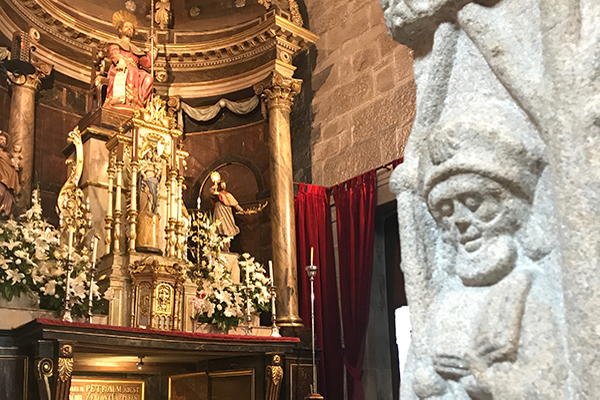 The parish church of Saint James was rebuilt for the last time in 19th century, although within its thick walls we can find elements of other churches that were erected before (in the 12th and 15th centuries).

Entering through the door that is on the side of the Paseo do Espolón, there is an inscription stone which reminds us the church was built by Archbishop Xelmírez in 1133, where we can read: “Dominus Eclesia Procurator edificavit in era MCLXXI,” that can be translated as “The Procurator built it in MCLXXI era.” Moreover, on the left side of the main altar, there is a stone pulpit, with the image of Saint James as a pilgrim, from the 15th century. It belonged to the Gothic church built by Archbishop Lope de Mendoza.

In the various altars and walls of the church, we can see different elements of the Jacobean tradition and images of Saint James. On one of the altars, we can see the Apostle James on his white horse. Near it, Santiago Peregrino (Saint James the Pilgrim), a 17th century carving attributed to José Gambino, known as the “Parrandeiro,” which is carried by young people from the town on their shoulders on July 25th to the Chapel of Santiaguiño.

Easily accessible, on foot and by car

GROUPS can contact the parish to visit the temple at alternative times.

Visiting times could be interrupted by any liturgical celebration

Winter (October to May)

Latest renovation in the 19th c.